For as long as I can remember, cars have been a part of my life. As a former Automotive Service Manager for 14 years and a P-3 Aircraft Mechanic in the U.S. Navy my heart still belonged to the classic cars. The love for the old classics is what keeps me going, and I would love to keep them going. The styles and personality of the oldies but goodies are what draws me to them. 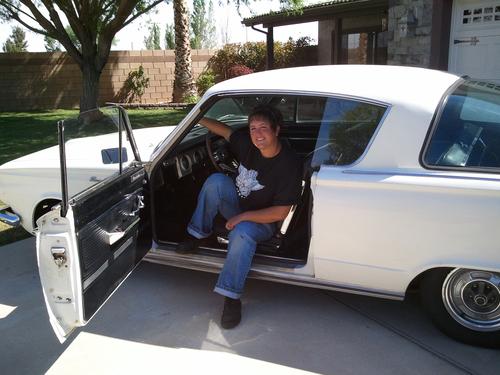 The Barracuda (’64-’67) has always been the car I would drool over and dream about. As I got older and my love for these cars grew…I knew I had to find one, not just one, but the one. I set out to find a ’65 as it was actually the first year that the Cuda was produced (yes they had a 64 only it was actually a valiant with a Barracuda package). It was not until ’65 that Barracuda actually became its own line. The ’65-’66 were my favorites as they had the huge rear glass with the small fins in back that I adore, so that threw out the ’67 barracuda when looking for my dream car. Now the ’65-’66 had very minor differences, but one that I could spot just by looking at it…the front grill. The ’65 has a more intricate grill (sort of like a billet grill on some of today’s trucks) and the ’66 had. let’s say, a simple grill with no character (I think) so the decision was made… ’65 here I come.

I had to kiss a lot of toads before I found my Princess Cooter. And when I found her it was love at first sight. She is a true California car and has never left this state. She was bought in Van Nuys California in 1965 where she spent the next 40 years of her life in that very same city…how do I know, I have the original registration from the day she was bought and all the registration papers til she became mine.

One thought on “Rochelle Price”